Warmer weather, work, and holidays have made the past few weeks quite eventful (and tiring) so I apologize for the lack of posting over that time period- though it may extend over the next week or two as well. In the meantime, just bare with me and enjoy 🙂

This particular meal is somewhat reminiscent of a Chicken Parmesan type dish, with some modifications. Instead of a pasta-based side, I went with a wild rice. And as for the chicken itself…

The boneless thighs were already in the freezer and were stuffed with Mozzarella and Asparagus (prep work already done). At first I was unsure what type of way i was going to cook it so I actually started off by boiling some rice. As my mind got to thinking, I was like “hmm, I can make this in similar fashion to chicken parmesan- just stuffed.” And so I made my panko batter and threw the chicken in along with some tomato sauce and red wine and slow cooked in the oven.

I topped it off with some fresh parsely and grated some pepito cheese.

So it’s that time of the year to go crazy and make all different sorts of burgers as seen here, here, and even here. So as you can tell, when it comes to summertime cooking, burgers are my go-to staple.

In this particular case I went a tad above and beyond and even made the rolls- a combination of plain flour and whole wheat flour and topped with roasted sesame seeds and sea salt. 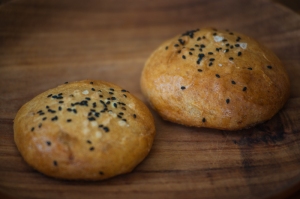 And then there’s the burger. A wonderful combination of beef and seasonings all packed together and grilled to perfection. In this instance, I went with the smoked bacon I had made a while back (sad to say as I am writing this I am all out and will have to make another batch), some fresh sliced avocado, and a nice semi-fried egg ready to ooze out after that first bite. All this with a side of Polish pickles and some homemade potato salad- don’t ask how to make that, it seems like everytime I whip up a new batch I am always adding different ingredients. 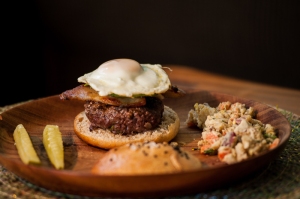 Sorry for the bit of delay with posting (got a bunch which will be coming up throughout the week, but things have either been a tad crazy (i.e. work) or like the past 2 weekends I have not been around (one weekend to my brother down in Maryland and this past Father’s Day weekend we had visited my parents up in Northern New Jersey).

In the meantime, I had 2 separate attempts within the past week and a half of making some sushi. A combination of tuna, salmon, scallops, and a few other white fish. 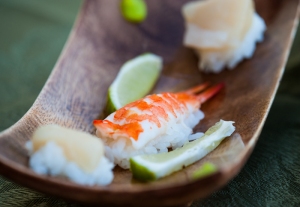 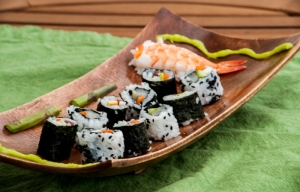 Sorry for the few days away but was visiting my brother and his girlfriend down in Maryland. We had a nice time hanging out, eating/drinking (both in the apartment as well as down in Bethesda- we went to Jaleo) and did some exploring- consisted of some downtown shopping one day and the following day to the botanical gardens and nature area. Also to note some pics to come of food made for the occasion as well 🙂

For now a quick post of some beef-cube kabobs we had done last week. The cubes I cut up the day before, threw in a ziploc bag and threw in a combination of spices and dark spiced rum (we have Kraken). Along with them we put on red onion pieces, baby carrots, potatoes (white and red) and I cut up some pears. All the fruits/veggies were tossed in some olive oil with various spices and put on the skewers. Right before putting the beef on I tossed them in my homemade bbq sauce.

I had come up with this dish the other night as we had some not so tasteful weather (so I needed something that was full of taste). With having some london broil in the fridge before packing and freezing it seemed like the perfect ingredient to start off with. From there, I decided I would season it and put in the oven broiler and take things from there.

While that was goin in the oven, on the stovetop i had water boiling for the pasta and then threw it in. From baking projects/experiments/fun, I had some heavy cream still in the refrigerator. I also had some “real” sharp provolone (Italian market up in Northern New Jersey which makes their own), capers, and the kitchen is always stocked with an array of spices.

I started off with some pumpkinseed oil and heavy cream. I let that heat up a little and then threw in provolone which I cut into small pieces to melt easier. I proceeded to add in some pepper, parsely, capers, and garlic. Wanting a little bit of smoky and sweetness I decided to pour in a little aged whiskey (in the end came to be a fine choice). I let this go until it became more of a creamy sauce. When the london broil was medium rare (quite pink) I took out and cut into the cubes. I then tossed them and mixed in the sauce with the heat on medium and cooked them the rest of the way in the sauce to really get in the flavors. This was all tossed in the pot with the pasta.

It may sound like a lot but it was a fairly simple ingredient list and cooking methods. With everything cooking at the same time it was fiinished rather quickly (30-40 minutes at most).  The other nice thing was the main ingredients of beef and pasta are easy to portion and thus we both had lunch for the next day.

Lately with the weather and Summer being almost upon us, there have been an influx of recipes and posts pertaining to various types of barbecuing. Keeping up with the trend, I went a slightly different route then the normal version (usually pork), and went with Pulled Chicken Sandwiches. 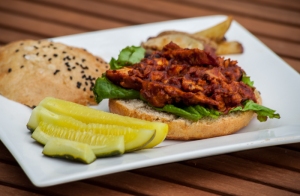 For the chicken, I had boneless thighs which I initially tossed on the grill and used a little oil/honey combination which seem to be a nice combination for keeping the chicken very juicy on the inside and a nice crisp outer-coating. After this step, I took the chicken and tossed in the 5-quart Le Creuset. I proceeded to scoop in my homemade barbecue sauce (spice coming from Anaheim Pepper) aand I poured in some spiced rum as well for a little moisture. I then covered the dish, tossed in the oven at 200 degrees and let it go for a few hours.

In the meantime, I decided some type of potato would be in order. Since I had decided we would have sandwiches, I went the route and cut up some potatoes and proceeded to cook in the oven to make some homemade french fries. My seasoning mix for them included: white-truffle infused oil, sweet paprika, finely diced garlic, ground peppercorn, and salt. 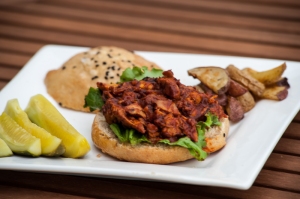 Throw in a side of pickles (counts as my green vegetable) and you have a complete meal.

Please vote for my awesome cheesecake 🙂

Have a wonderful day.

Rantings of an Amateur Chef

Well if anyone is into cheesecake, this is my 2nd version for the competition over at the Ranting Chefs Blog. Plenty of other desserts and meal recipes and ideas over at his blog as well.

Rantings of an Amateur Chef

Each participant in round 2 won their first round and is ready to battle for more.

I will post a pairing each week on Wednesday and Thursday and open the polls for voting. The polls will be open from Thursday until the following Wednesday (before the next pair posts). The winner of each matchup with the most votes will move on to the next round and the chef will produce another recipe for their new matchup. The overall winner will receive any prizes I can acquire. To date the winner will receive:

This week’s pairing is:

Cookies with cheesecake (Chad) vs. Non-Fruit Pies (Stephanie) . Chad beat out pudding/moussee to advance and Stephanie beat out Ice Cream. Today we have…

With all the great weather we have been having lately, the random days where it decides to rain- or hail, i’m left to scrambling to come up with some various dishes. With what I had in the pantry I knew I had to be a tad creative (as the wife is not a huge fan of rice), so I had to kick up the flavor intenstity. In the end, I wound up making my own version of orange-chicken fried rice with broccoli and asparagus. 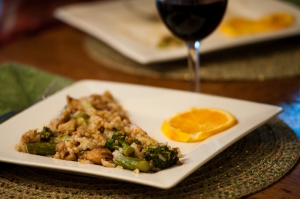 The rice part was simple enough. Boil it like you normally would, drain it, and then set aside. Similar regards with the vegetables as i steam em first (not quite all the way) and then set aside. The main component of chicken had already been packaged with diced garlic and soy sauce before I froze the package. Once thawed out, I took the pieces and cut into smaller cubes. I tossed these in a bowl along with some chili powder, a little pineapple juice (optional), a little more soy sauce, some cor starch (give the chicken a crispyt coating while cooking), and I zested two oranges. All of this was mixed thoroughly and I proceeded to cook on my 2-burner griddle in some grapeseed oil (slightly higher smoke point). As this was getting close to the point that I wanted (slight crispiness) I then tossed in the vegetables to finsih cooking them through and for the flavors to soak in.

At this point, I also cleared off a portion on the front of the griddle, tossed on some oil, and poured on the rice to start “frying” it. Once it got to a point I was happy with, I then proceeded to mix all of the ingredients together on the griddle.

This is a nice, fun, and somewhat quick meal which can be tailored in many ways to suit one’s own liking. In this particular instance, I kept it in similar fashion to a version I had tried a few months back at a retro 50’s themed diner. 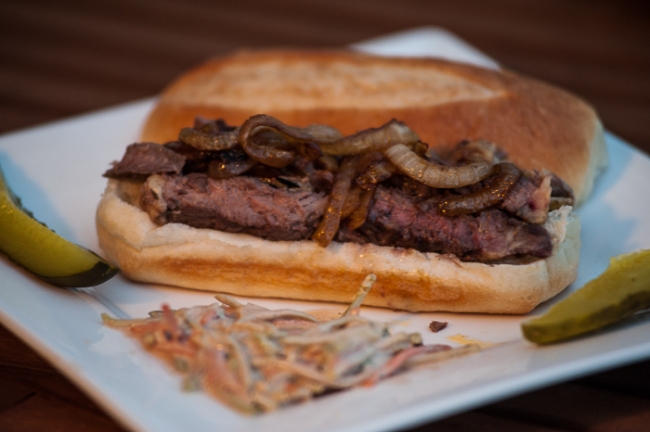 On to the fun part: Start off with a nice boneless ribeye or two (or more depending on how many you are feeding), season to your liking- I used some cracked peppercorns, black-garlic salt, and some rosemary. Toss on the grill and cook to your liking (I did mine to about medium-rare as they will cook a little after you pull em off).

For the onions, I sliced up a nice large yellow sweet onion. Threw it in a skillet of already heated up olive oil, threw in some pepper to taste, and tossed in a little Worcestershire sauce. Cook til golden brown. Throw it all together on a nice roll, toss in a side of homemade broccoslaw and some pickles and bam…you have a complete meal. Quick, easy, tasty…what more could you want? 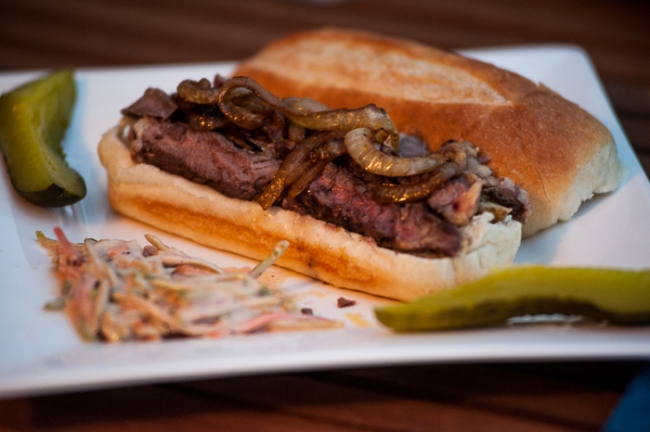