Tonight’s dinner was a nice modification to one of my favorite styles of cooking- barbecuing. However, since it was around 20 degrees out and some fresh snow on the ground actual grilling would not suffice. Time to utilize the oven. 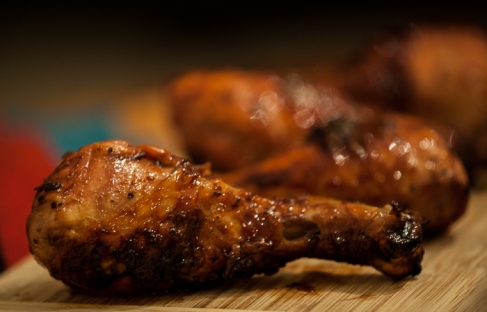 Beforehand, I had marinated the chicken overnight in a nice spicy marinade as I like to have a little kick to the flavor. I then set up a rack over a sheet pan and started to cook them on 425. After they had been in for a while and getting to the point where they were more thoroughly cooked on the inside (i.e. not much red left) I then basted them with a blood orange and honey reduction I had made while they were first put in the oven. The consistency was almost like a barbecue sauce but with pieces of orange pulp throughout. I then coated one side of the drumsticks, cooked a little longer, flipped over, and then did the other side.

Overall, they still had that spicy kick to them but then had a nice citrusy sweetness (think oriental like Orange Chicken).

Of course when it comes to the weekend, you can’t forget the glass of wine.

With the storm in full force (think we are at the part of lots of sleet/rain falling) and everything shutdown (including work) it allows me some time to share a nice dinner.

The cod on it’s own was  a simple enough task as it just needed some oil in a pan and was cooked on both sides for a few minutes. The part that took time was making the flavor pairings for the fish.

The spinach foam is a combination of sauteed spinach along with some cream which gets thickened and then gets filtered through a fine strainer. I then utilize my culinary whipper with a gas cartridge to charge which creates a “foam.”

The other accompanying sauce is a blood orange gastrique which is a combination of fresh squeezed blood orange, sugar, sherry wine vinegar, and stock. This then gets reduced to a thickened state.

For the fries, I cut strips out of the sweet potatoes (about an inch thick) and a few inches long. You can do it with or without but I left the skin on the fries. I then tossed them in olive oil which I added some seasoning too and baked them in the oven. 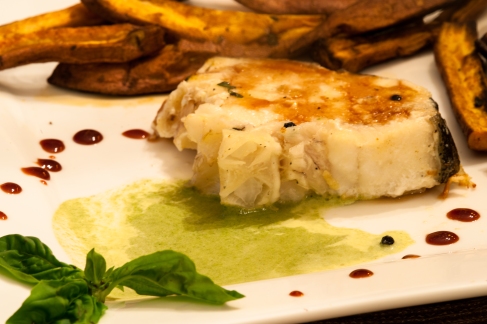 So today I was feeling more ambitious than normal so I came up with a nice 2 course meal.

Start off by taking first few outer leaves off. cut b/t a quarter to a half inch off the end and on the other side trim the stem. I cut up a lemon into slices and put them in my deep skillet (you can use roasting pans as it does go in the oven…my pots/pans are good up to 400 in oven). Over the lemon I grinded some sea salt and some rosemary. To the artichoke. I then coated all sides with olive oil and placed each half “cut” side down on the lemon slices. I then places in the oven for about an hour at 350 degrees until tender.

As an aside (optional) with my culinary whipper I had made a garlic-truffle oil infused foam and topped with some rosemary. Complimented the artichoke rather nicely. 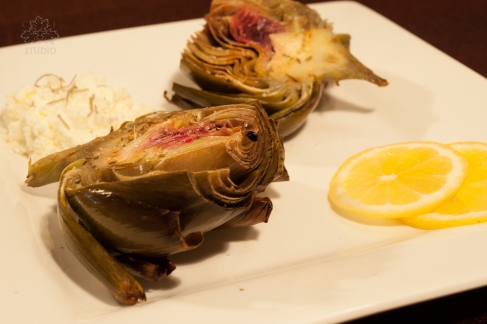 Now on to the main dish. Started off by taking the sea scallops and soaking them in salt water for about 10 minutes, then washed and let sit air dry. I did a pan sear with them in a “clarified” butter which is where you melt plain old butter and you scoop off the top foam and just use the yellow middle part (will also have solids sink the bottom). This type of butter works much better as its higher smoke point allows for a nice caramelization process to occur with the scallops.

Each side of the scallop is cooked in a pan for 3-5 minutes until a nice brown occurs. For the scallops I had made a blood orange demi-glace which i took a blood orange and cut into small pieces, threw in some red wine, some sugar, salt, and brought to a simmer. As it sat the orange got softer and I “squeezed” the pieces to fully release the juice. I then took this and poured it through a mesh strainer to just collect the liquid which was later on reduced down to more of a thickened sauce.

The “flowers” as I like to call them as that was the form I was going for complimented very nicely as they were cold, earthy vegetables that gave a sort of relief from the rich scallops. For them I used a few gastronomy techniques being cold oil spherification (made balsamic and white-wine caviar) and for the main flower part I used agar-agar to make a spiced-beet sheet which I then cut out circles. The base of the flowers were radishes and I used carrots for the petals. Besides being a nice earthy side-dish I felt they went well with it being the Spring season (though a very warm spring day of 90 degrees). 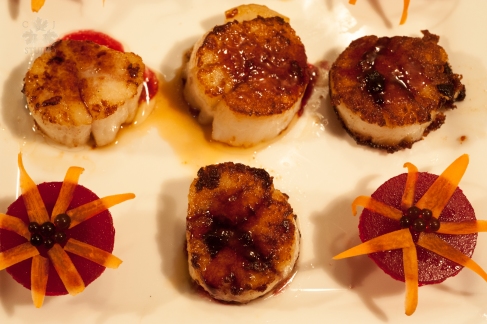