To be honest, I am quite unsure of the last time I had made a shrimp scmapi myself- I’ve had it out to eat at places or in the past when visiting my parents but making my own- hmmm, at least before I started blogging.

I started off with some uncooked shrimp (26-30 count per pound variety) and I took them out of their shells and placed on paper towel to get rid of some of the extra water weight. I then put them in a large bowl, zested 1 lime (yes a lime, not a lemon), tossed in some ancho chili powder, a little bit of salt, and some cilantro and mixed together.

In a medium pan, I heated up 3 teaspoons of butter and 2 of olive oil. While slowly heating I diced up a couple of garlic cloves (4 or 5) and tossed this into the now hot butter/oil mixture. I sauteed the garlic for a minute or two and then tossed the shrimp in on top. I let them cook for a few minutes and then added in 1/3 cup of Rose wine (did not have a bottle of white open but this is just as good). I then simmered this mixture until the shrimp turned pink.

Separately, I had a pot of water boiling and had tossed in some thin spaghetti. Once the spaghetti was ready i drained it out and tossed the shrimp/sauce mixture into the pot. I then squuezed the juice out of two lemons and tossed in about 1/2 cup of fresh diced parsley and mixed it all together.

As you can tell, the wife was happy, so scampi was a success.

Since I am in the moving process (official day of loading up the UHAUL and trekking over to Jersey is Wednesday) so at the moment not going into any in depth cook/baking ordeals. I thought this was a good one to show because of how easy it is to do, it tastes, good, lots of options, and you can make a nice presentation with it. 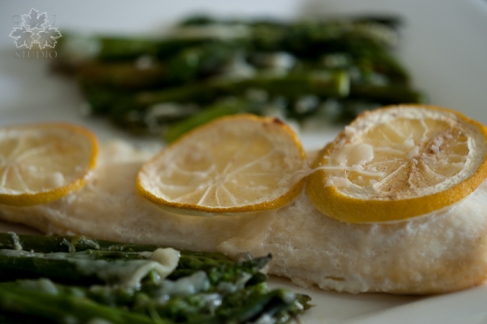 This can be done with just about any fish imaginable, but since I had some Wolffish left in the freezer, that was what I went with. Simple enough, start off with some olive oil in the dish, I squeezed in some lemon, swirled the fish around to coat it. I added some salt and pepper and placed a few lemon slices on top. On the sides of the fish I threw in some asparagus spears. Then it was bake in the oven for about 15 minutes or so. Near the end, I tossed on some shaved Grana Padano and baked a little more.

Not too long ago on one of my trips through Trader Joe’s, I had stumbled upon a fish that I do not typically see all too often- Norwegian Wolffish. The last place I recall seeing this on the menu was a while back at BoneFish Grill where they have it with creamed spinach, etc.

For my liking, I had taken the filet and stuffed it with a combination of crab meat, flaked asiago cheese, salt, pepper, and some lemon juice. I then pan seared it in some oil on both sides and baked on low heat.

In a small saucepan, I chopped up some fresh horseradish, added some basil, rosemary, crabmeat, and olive oil and sauteed for a few minutes. I then added in some heavy cream and made into a sauce to top the fish off.

Next on the menu was the side dish. I went a tad out of the box on this and utilized both asparagus as well as “smoked bacon.” The smoked bacon is not bacon like grocery store style but actual slab piece of pork put into a smoker- really does not need to be cooked at all. I wrapped the asparagus in the smoked bacon (after I had peeled the asparagus) and cooked until tender. I then removed the asparagus, diced the pork into smaller pieces and added some citrusy accents to then pour over the asparagus. 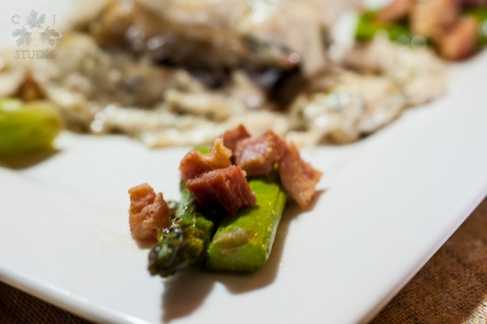 Overall, a nice combination of flavors having the strong flavors of the horseradish and asiago with the fish and crab and some citrusy and salty combinations paired with the asparagus.

Soon to come—crab cakes with the extra crabmeat 🙂