I had come up with this dish the other night as we had some not so tasteful weather (so I needed something that was full of taste). With having some london broil in the fridge before packing and freezing it seemed like the perfect ingredient to start off with. From there, I decided I would season it and put in the oven broiler and take things from there.

While that was goin in the oven, on the stovetop i had water boiling for the pasta and then threw it in. From baking projects/experiments/fun, I had some heavy cream still in the refrigerator. I also had some “real” sharp provolone (Italian market up in Northern New Jersey which makes their own), capers, and the kitchen is always stocked with an array of spices.

I started off with some pumpkinseed oil and heavy cream. I let that heat up a little and then threw in provolone which I cut into small pieces to melt easier. I proceeded to add in some pepper, parsely, capers, and garlic. Wanting a little bit of smoky and sweetness I decided to pour in a little aged whiskey (in the end came to be a fine choice). I let this go until it became more of a creamy sauce. When the london broil was medium rare (quite pink) I took out and cut into the cubes. I then tossed them and mixed in the sauce with the heat on medium and cooked them the rest of the way in the sauce to really get in the flavors. This was all tossed in the pot with the pasta. 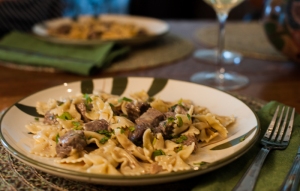 It may sound like a lot but it was a fairly simple ingredient list and cooking methods. With everything cooking at the same time it was fiinished rather quickly (30-40 minutes at most).  The other nice thing was the main ingredients of beef and pasta are easy to portion and thus we both had lunch for the next day.

With grilling season in full swing, I felt it was time to combine a few different cooking styles to form a dish that breaks away a little bit from traditional grilling.

I started off with some boneless thighs which I seasoned lightly and then tossed on the grill. While on the grill, I basted them with a combination of balamic vinegar, honey, and chili powder. Upon completion I put them on a cutting board and cut into small pieces/strips and set aside.

In my double burner griddle, I poured in a little oil and a teaspoon of butter and put the heat on low. I then tossed in some diced garlic and let simmer for 1-2 minutes. I then tossed in some broccoli and let cook for a few minutes and then tossed in some cooked baby shrimp. At this point, I added in 2 more teaspoons of butter, 1/4 cup of diced up parsley, and stirred around. I When it was close to being done, I threw in the chicken, some heavy cream, and  grated on some fresh pepito cheese.

After the cavatappi was done cooking in a separate pot of water, i drained it, poured in the mixture with the sauce, mixed well and served.

To be honest, I am quite unsure of the last time I had made a shrimp scmapi myself- I’ve had it out to eat at places or in the past when visiting my parents but making my own- hmmm, at least before I started blogging.

I started off with some uncooked shrimp (26-30 count per pound variety) and I took them out of their shells and placed on paper towel to get rid of some of the extra water weight. I then put them in a large bowl, zested 1 lime (yes a lime, not a lemon), tossed in some ancho chili powder, a little bit of salt, and some cilantro and mixed together.

In a medium pan, I heated up 3 teaspoons of butter and 2 of olive oil. While slowly heating I diced up a couple of garlic cloves (4 or 5) and tossed this into the now hot butter/oil mixture. I sauteed the garlic for a minute or two and then tossed the shrimp in on top. I let them cook for a few minutes and then added in 1/3 cup of Rose wine (did not have a bottle of white open but this is just as good). I then simmered this mixture until the shrimp turned pink. 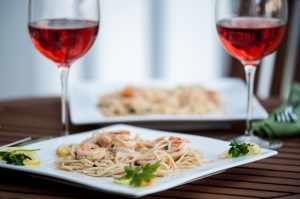 Separately, I had a pot of water boiling and had tossed in some thin spaghetti. Once the spaghetti was ready i drained it out and tossed the shrimp/sauce mixture into the pot. I then squuezed the juice out of two lemons and tossed in about 1/2 cup of fresh diced parsley and mixed it all together.

As you can tell, the wife was happy, so scampi was a success. 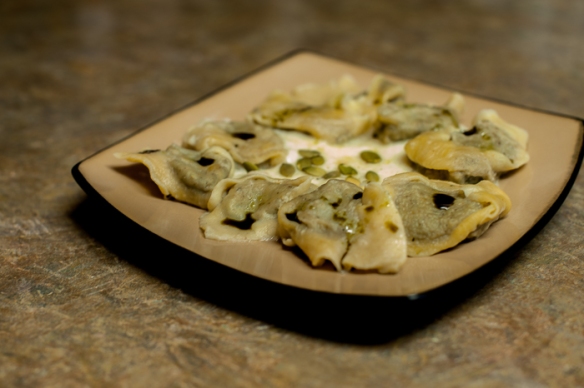 Sorry for being a bit lax the past several days, have been a tad under the weather and thus not much cooking happening. That should change by the weekend though so bear with me in the meantime.

Before taking ill, I was able to create these as part of a weekend meal. I started off by making a simple egg-pasta and rolled it out really thin. I then cut it into small squares.
For stuffing, I halved a spaghetti squash, basted with some oil and spices and proceeded to roast in the oven. In a pan I sauteed some swiss chard that I chopped up finely.
After the squash was roasted I pulled out the strands, added it to the chard, tossed in some asiago and and some romano and cooked until melted in.

After making the filling I pulsated it in the processor to make it a tad more consistent and easier for stuffing the tortelloni. I took a spoon, added some to the center of each square. I then folded them into a triangle, took the two corners from the longer side and wrapped around in a loop separate from the rest of the triangle. To cook, I just tossed them in some boiling water and let cook for about 5 minutes after they started to float.

I made a sauce with some Asiago, Parmesan, and some milk in a saucepan. I then topped the tortelloni with some pumpkin-seed oil.

I wanted to do something with shrimp but couldn’t go overly spicy, so I did a slightly different take on a scampi.

I started off with a teaspoon of olive oil, some orange/lemon peel and sauteed the pancetta until crisp. I put that one the side leaving the oil in saucepan and added in some white wine, chopped garlic, rosemary, and oregano leaves. After a minute or two of sauteeing the garlic I then added in the shrimp which I had pre-seasoned with salt and peppercorn.

Upon completion of the shrimp being cooked I then warmed up the pancetta and placed over the shrimp. The sauce from the shrimp was then added to the pasta along with some fresh melted butter.

Pork chops are nice when you want a good meal but don’t want to spend too much time in the kitchen. They are also very nice because of the creativity and different styles of meals you can create with them. Personally I prefer the bone-in chops, think they have a more distinct flavor, but anything I post pertaining to chops can be done with the boneless version as well.

For this meal, I did a simple flour, egg, and then panko coating on both sides of the chops. I heated a pan with some oil and when that was heated up I threw on the chops and coked on both sides for about 5 minutes per side.

In the meantime, I boiled some pasta and separately the same thing with some asparagus. In a saucepan I made a sauce with some butter, heavy cream, some sharp provolone (grated it directly into the pan), squeezed half a lime, added some capers, and then some cracked pepper. When the pasta was done I drained out the water and then added in both the sauce and the asparagus. 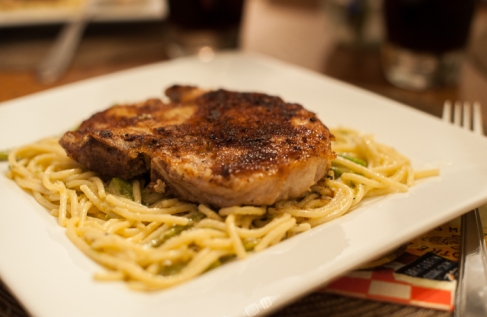 Well we had a nice few days of weather in the 50’s and 60’s (the snow all melted as well) and now we are at a point where its going back down into the 20’s and it seems like it will be quite cold for a while. It seems appropriate to go with some soup.

This first soup is a nice homemade chicken soup. The stock started off with a few quarts of water, lots of chicken bones with meat (used around 6 lbs.) and brought that duo to a nice simmer. Added in various vegetables later on in the process (carrots, celery, onion, garlic) and let it go for another 2 hours after that. With about an hour left I put in a satchet of various spices. Throughout the process I used a skimmer to remove the fat layer on top which in the end makes a nice clear stock. Overall, this amounted to about 5 quarts total, which has been used for this soup, another soup (later on in the post), other various dishes, and some is frozen for future usage. The nice thing is versus stocks/broths that you buy, for all the flavor in this there is no added salt- all the flavors of the chicken, vegetables, and aromatic spices.

To continue the soup, I started off with the stock, added some water and heated up. I tossed in some onion and garlic early on, had sauteed the chicken separately, cut into small pieces and tossed in. Around this time I added the vegetables (all cut and tossed in raw except the potatoes which I roasted first) and let the mix go for about 2 hours. With about an hour left I threw in pasta I cooked and drained separately and in the end a nice chicken noodle soup.

If you have eaten at The Olive Garden and have tried their Zupppa Toscana soup, this is reminiscent of that with some tweaks for personal tastes/preference. Starting off with stock and water, I diced up and tossed in both red and white potatoes. I let it simmer until they got soft and proceeded to mash them but only to the point where they were more or less small pieces not like a creamy mashed. I separately cooked sausage in a pan with some garlic and pepper and tossed into the stock pot. I proceeded to saute chanterelles, spinach leaves and collard greens in some olive oil and spices and tossed them into the mix. I then proceeded to boil some wild rice and tossed into the mix. With about an hour or so left, I added in some aromatic spices, shredded in some parmesan and skimmed the top before serving to make a nice clear broth.